Nope I didn't spell that wrong, I am talking about these little guys....
﻿

Every few weeks I participate in a produce co-op called Bountiful Baskets.  For a $15 contribution we get a basket of produce (usually split 50/50 between fruits and veggies) that is typically worth around $50 if it was all bought from a grocer.  The hard  fun part is that like Forrest Gump's  momma always said, "[it's] like a box of chocolates, you never know what you're gonna get."  So while you know you'll get fruits and veggies it is always a surprise what you're going to pick up as the offerings depend on what is in season and what they could get from their suppliers/growers.  I realize for some people this element of produce roulette doesn't work; you have to be flexible in what you'll use and what you like to eat.  For us it has been a fun way to try new fruits and veggies that I normally wouldn't pick out on my own.  If you watch Food Network, I liken it to having my own Chopped episode in my kitchen...only not with the strict time limits... I get this basket of ingredients and then I have to figure out what in the world I'm going to do with it.

So far we've been able to try new things like...
﻿﻿
﻿﻿﻿
﻿﻿
﻿
In my recent basket I got several chayotes (also known as mirlitons in New Orleans) which is a kind of Mexican squash that I had seen before but never tried.  I was a bit intimidated.  How can you not be intimidated by this... 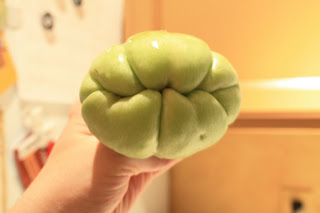 If you draw eyes on it, it looks like grumpy old muppet or perhaps a venus fly trap that's just ready to snap. 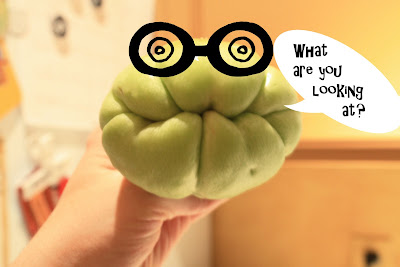 Since Dr. Love was on call this evening and I wasn't ravenously hungry thus giving me ample time, I decided to tackle the muppet fly trap with these two recipes for stuffed mirlitons from Emeril Lagasse and Paula Deen (hide the butter) as my inspiration.  Since Dr. Love doesn't care for fish, thus meaning I hardly ever buy it, I decided to substitute diced chicken breast for the shrimp.

Following Paula's instructions I tossed the chayote in a pot of boiling water and let it simmer for a half an hour while I took the dog for a walk.  When we returned the chayote seemed done as the knife pierced it pretty easily leading me believe it was "the consistency of a soft potato" as Paula instructed.  After slicing into it, however, I'm not so sure as the middle was still pretty firm (after I removed the seed, which was a surprise).  I'm not sure if it wasn't done enough or if that just their nature but it made scooping out the middle a bit of a failure... 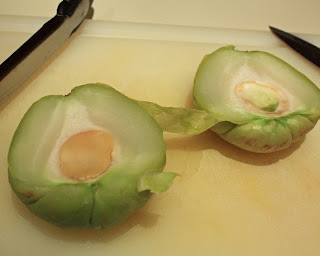 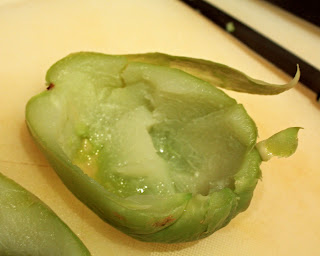 I sauteed the onion (red was all I had), celery and green pepper in a bit of olive oil (sorry Paula, no butter), then added the chicken, chayote "pulp" and garlic.  I seasoned it all with dashes of paprika, garlic powder, onion powder, cayenne pepper, thyme and oregano as suggested in Emeril's recipe.  Sorry I didn't measure anything rather this was a kitchen adventure and I was cooking with reckless abandon. 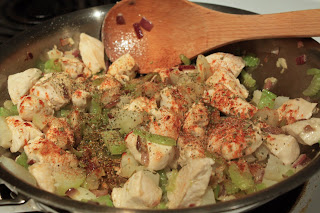 After everything was cooked, I stirred in a 1/4 cup of bread crumbs, scooped the mixture into the remaining chayote shells and put them in the oven to bake.  Half an hour later they looked like this... 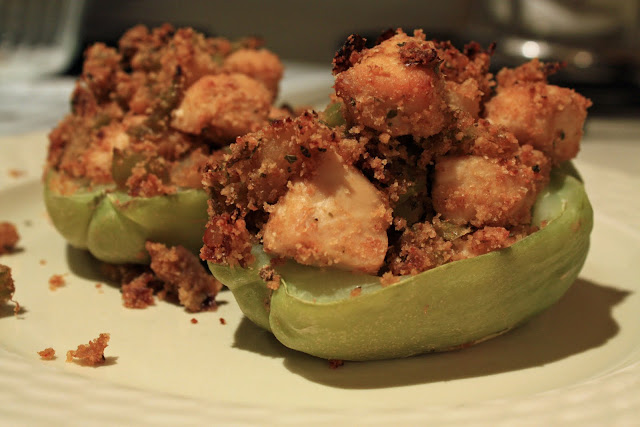 Sorry for my poor plating but at this point it was 8:30, I was hungry, and lets face it I wasn't going to dress it up all fancy just for me.  All the effort of just cooking these things only for myself was more than I usually do for dinner alone.

I was a bit perplexed about how to eat them.  Would it be like a stuffed pepper where you ate the whole thing, skin and all?  Don't think so.  The skin was tough and wouldn't cut so I had to scoop the stuffing and chayote flesh away from the remaining skin.

{side note: It reminded me of when my mom first made us edamame and we had no idea how to eat them.  We ate them like regular snap peas, beans, pod, and all.  It was fibrous, furry and disgusting. I couldn't figure out why people raved about them.  It took several years before I was enlightened on the proper way to eat edamame and fully appreciate them}

So what did the chayote taste like?  A zucchini that was blended with a lima bean.  Kind of squashy, a little nutty, overall fairly decent.  I don't think it will be the next staple of our kitchen but it was interesting, though the whole thing took too much time for a regular work night dinner.  I still have two more chayotes sitting in the fridge.  Now if I can just figure out what else to do with them, and the time to do it.

Email ThisBlogThis!Share to TwitterShare to FacebookShare to Pinterest
Labels: Bountiful Baskets, Someone's in the kitchen