Anyone have a chill pill?

Thank you so much for all of the congrats, best wishes, and kind thoughts you have sent our way.  It means a lot, and I'm glad many of you are sticking with us through the next step in this journey.

First off I apologize for not giving an update sooner.  Work has been busy lately and by the time I get home I don't have energy for much else besides eating dinner.  Since I last posted I've been in the midst of the longest 2WW ever as we wait for our first ultra sound.  Things are still very early but so far I've felt really good.  Seeing as my mom had really difficult pregnancies with lots of morning sickness, to the point my dad says that she looked blue a number of times, I expected to feel pretty miserable from the get go.  In fact when the nurse called me with the second beta results I asked her about morning sickness remedies and bought cereal to keep on my nightstand just in case.  There's still plenty of time for the morning sickness to come, and now that I'm writing this it will probably come storming in as soon as I hit "publish," but the only symptoms I've had are bloating, fuller breasts, and exhaustion.  Give me a blanket and I'll fall asleep on the couch by 9:00.

All was going well until I woke up last Wednesday and noticed I felt less bloated and not as...how do I say it...chesty.  Of course whether I really was or not is hard to tell but the mere thought was enough to crack the widow open and all my fears came rushing over me.  I told Dr. Love I about my apprehensions and he tried to put them to rest.  "So you are feeling a little better and it is worrying you?" It sounds crazy but it is totally true.  I had a minor (ok maybe it was more major) melt down.  In my mind symptoms easing up meant the hormones causing the symptoms were lessening which then in turn meant something was wrong with the baby.  All sounds perfectly logical, right?  Well apparently not as I'm finding out that in the early stages of pregnancy symptoms can come and go.  Of course I found this out after Dr Love decided to order a third beta draw to see what my levels where and guess what they were perfectly fine, chugging right along as they should.

I wonder if I would be as nervous if we hadn't struggled with IF to get here.  I still haven't bought ANYTHING baby related.  I don't have a ticker up and probably won't until we have our ultrasound.  The only thing I do have is a small little app on my phone.  I want to be clear that I do know I am pregnant and that chances are everything should go just fine as so far I have no physical evidence to the contrary.  BUT I'm not naive.  I know lots of things can happen in the early stages that we may not expect, and I know until I have our little one in my arms nothing about this pregnancy is for certain.   I hate how IF takes away your innocence in this whole matter.  There's a line I found in an article on Resolve.org that I think sums it up well...

The emotional and financial resources expended trying to get pregnant can often create a deep seeded fear of losing the pregnancy or of something going wrong with the baby’s development.
It's hard to put everything back in Pa.ndora's box once it's been opened.  As things progress, however, I can hope and work to quiet my fears and anxiety.  Until then I need a prescription for one of these... 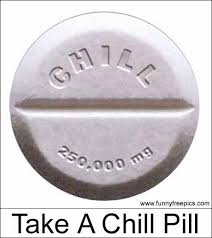